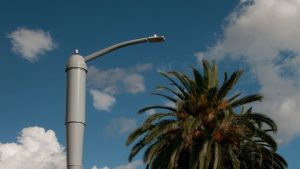 Los Angeles is the first city in the world to deploy new “smart” Philips street lights, which have built in 4G LTE wireless technology from Ericsson. The SmartPoles are actually standard city street lights, but they been upgraded with efficient LED lights and Ericsson’s small cell technology. Since the lights are connected, the city can manage energy costs by making sure that streets are well-lit without wasting energy. But the biggest change is adding the wireless connectivity, which will provide better broadband coverage without adding any new cell towers.

The project takes advantage of what L.A. mayor Eric Garcetti calls “previously untapped real estate” on street lights. Better yet, by leasing the city’s light poles, the project won’t cost tax payers anything, and it will actually bring in hundreds of thousands of dollars in revenue. Mayor Garcetti stated, “This project shows what smart infrastructure can do for Los Angeles: create jobs, save tax payer dollars, and improve our environment.”

There is certainly a need for improved wireless coverage. Cellular data traffic is expected to grow nine times by 2020, according to an Ericsson Mobility report. A reliable wireless network is especially important for keeping smartphones online in case of an emergency. This is especially significant in a city like L.A., which is prone to earthquakes. So far, 22 SmartPoles have been installed in Hollywood, and the city plans to have a total of 600 in operation by 2018.

Philips SmartPoles were specifically designed and tested to accept FCC licensed wireless mobile network operator equipment. This enables an alternative deployment methodology for 4G LTE broadband services which will connect each pole through a fiber link to its core network.