Rufus set up the stepladder outside the trauma room so I could climb up and take a look above the panels in the drop ceiling. For the past few days we’d been looking for the source of interference to the electronic sensor panels on an imaging X-Ray system in this urban hospital. The “noise” was causing dark horizontal lines on the images, which were, at a minimum, distracting and more importantly affecting image clarity and potentially affecting patient diagnoses.

Working in and around the trauma room, for me, was a bit unnerving, what with the gunshot wounds, traffic accidents, mauled limbs and various crises played out in a steady but random order. The trauma room was a critical part of the emergency room function, where triage was performed on the most-acutely injured or suffering. This particular operation featured three beds for quick-action. 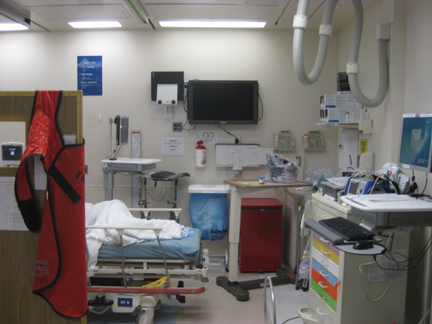 An overhead gantry affair allowed the technician to swing the X-Ray source from bed to bed. The key was a quick diagnosis of internal injuries. As the patient may or may not be able to cooperate with the ER team, flexibility in the X-Ray system was of paramount importance. The electronic sensor used a transistor imaging technology in an array-format. When the X-Rays were collected and scanned, the cassette-like sensor (a bit larger than a traditional X-Ray film) wirelessly transmitted the image to the control station and the image could be viewed nearly-instantaneously—no chemicals or delays—pretty cool. 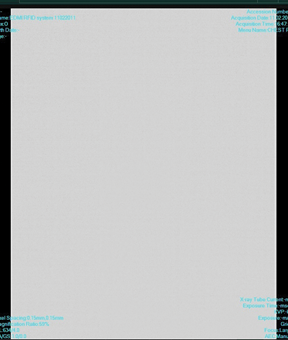 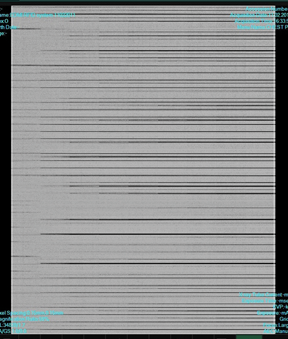 The going-in supposition was that this was an “EMF” or low frequency coupling problem, so the initial efforts focused on measurements starting from 60 hertz to a few hundred kilohertz. This initial diagnosis seemed to be confirmed by the observation that the noise artifacts were strongest on the right hand side of the room, indicating a near-field coupling issue. Focusing on the 60 Hz to 5 MHz area, the tallest pole in the proverbial tent was a signal at 58 kHz which had all the hallmarks of a dirty, nasty source (Figure 4). 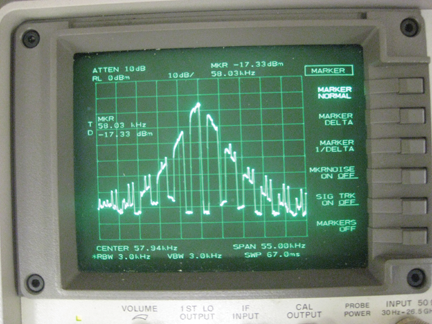 The signal had very strong 3rd and higher harmonic energies, indicating a fast-switching quasi-square wave behavior. The noise source appeared to be strongly associated with the wiring, cabling, bus duct and even building steel that was on the far-right side of the trauma room.

The strong periodicity of the artifacts led me to suspect (falsely, it turned out) that the 58 kHz was somehow coupling in the sensor and corrupting the raster scan frequency. Not having any technical details on the sensor, it was a decent guess: the frequencies seemed about right for a horizontal scan rate in imaging equipment. We’d seen image noise in the good old days of CRTs, before the widespread deployment of flat panel screens, which are inherently immune to magnetic field interference (of the “usual” variety). The CRT interference was usually due to 60 Hz magnetic field coupling into the vertical refresh; computer displays used non-60 Hz vertical refresh and the power line frequency would create a “beat” frequency, wiggling the screen at a few hertz.

In this case we searched for the source of the 58kHxz. After eliminating various sources in and around the room (fluorescent lights, nearby elevator drive, equipment in the trauma room and an RFID access-system in the hall) the first day had passed and a certain level of frustration was rising with the client and the client’s client (the Emergency Room team). 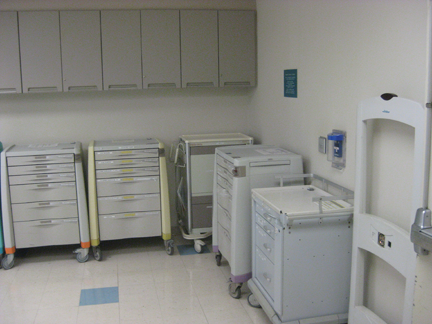 Some additional survey equipment was needed to pinpoint the offending conductor(s), so a return visit was arranged. In addition, we widened the frequency range of our search up to 10 GHz, just to ascertain whether something was interfering with the data transfer over the WiFi connection between the sensors and the access point connected to the PC station.

Using more localized magnetic field sensors (small loops) we attempted to map out the origin of the source emanating, it seemed, from everywhere (ceiling, floor and walls on the far end of the trauma room). The vexing problem was that it appeared that the current was present on every piece of metal in the building—and there was a lot of metal. I supposed that there was a grounding problem of some kind associated with a fairly high powered pump or motor of some kind. How else could one get a wide-spread current flowing “everywhere”?

I passed along the unpleasant diagnosis that some kind of shielding would likely have to be installed. The trauma room, not yet fully commissioned and fitted with all manner of fixtures, wiring, appliances and other equipment, would have to be “un-done” to some degree to install the shielding. Groan. I passed along this diagnosis during the three p.m. conference call between the X-Ray manufacturer and the hospital leadership.

The news was met with negative joy.

It was at this point that one looks for some other kind of support and I beseeched Norm. “Please give me a hand.” The message came back, clear-as-a-bell: “Keep Looking.” OK, I’ll keep looking and we redoubled our efforts to track down the source: upstairs, downstairs, in the elevator equipment room, above the ceiling, in electrical closets. Nothing was obvious. I went downstairs past the ER entrance (for the twentieth time, at least) and noticed, amongst some supply carts, a pedestal at the doorway. Hmm, a theft-detection system common in retail outlet chains: RFID. When I rejoined the team I suggested to Rufus that we power the thing down and see what happens; I continued to perform my survey measurements on the second floor without any brilliant success and rejoined the team in the trauma room.

In the EMC business one always hopes to load and fire that silver bullet that will slay the EMI beast, but after a while, one doesn’t elevate hope till the thing is confirmed DOA. This time, however, I walked up to Rufus; he had a bemused look on his face.

Sure enough, we shot a half-dozen RFID “on” and RFID “off” trials . The appearance of the artifacts were definitely correlated to the operation of the RFID. I confirmed the frequency: 13.56 MHz1, a standard frequency band. The funny thing was, it was not the highest signal level in the general spectrum of noise in the ER. Go figure. We stopped chasing the red herring and gave the more palatable news to the client.

In this business, it is not always obvious; sometimes you just have to “keep looking”.

Note
This RFID frequency (13.56 MHz) is in very common use and it would not have been evaluated during 60601-1-2 immunity testing for medical equipment as radiated immunity testing is performed from 26 MHz up. In addition, the RFID transmitters use a magnetic field and traditional radiated immunity simulate Electric field sources; the coupling is inherently different. Perhaps the standards community needs to look at doing a “spot frequency” test at the 13.56 MHz frequency?

Post script: The FDA is, apparently, looking into this as part of their ongoing work at the Center for Devices and Radiological Health, looking at magnetic field immunity at 13.56 MHz and at 125 kHz, another widely-used RFID transmit frequency.