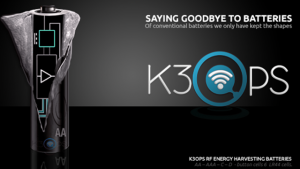 A company that is just one year old is about to unveil revolutionary technology that could replace batteries. K3OPS has developed a product that looks and acts like a regular battery, but is actually an energy harvesting device that converts “left over”electromagnetic fields into energy to power small electronic devices.

The idea is to stop wasting the radio frequency (RF) emitted from nearby sources such as WiFi, bluetooth, and 4G. On the K3OPS website, Xin Wei, one of the company’s founders, describes how the technology works: “We are far beyond the conversion constraint and performance by controlling ‘RF-interferences,’ by harvesting different frequencies from near and far, by using Metamaterials combined with nanotechnologies.” The devices can constantly deliver 7.5 Volts, which is 2.5 Volts more than common USB chargers deliver. They would be available in typical battery sizes, such as A, AA, button, etc., or even cell phone batteries. Unlike traditional batteries, K3OPS devices do not contain toxic chemicals, and they supposedly last forever without any maintenance. It all sounds a bit too good to be true.

K3OPS also plans to release a couple of interesting consumer products that use the technology. Squid is a wearable wristband that monitors electromagnetic fields, as well as heart rate and body temperature. Of course the wristband would have K3OPS technology so it would not require batteries and it could even be used to charge electronic devices by attaching them to the band using a cable. Another application for the technology is a phone case that continuously charges a smartphone. The case has an embedded rectenna system, a special antenna that harvests and transforming ambient RF into direct current electricity. The system is also available on a sticker so that it can be used with any smartphone case.

The company expected to unveil their product at the Wearable Technology (WT) Conference in San Francisco this July. There is already direct competition from another company, Nikola Technology, collaborated with Ohio State University to develop a self-charging smartphone case that uses the same concept of recycling wasted RF energy. They already announced their technology at TechCrunch Disrupt New York in May. We’ll be keeping a close eye on both companies in the year ahead.

[Editor’s note: After three years of development and an additional year of testing, K3OPS is ready to reveal their technology at the WT Conference on July 10. Until then, the company is keeping very quiet about their process. In the meantime, K3OPS co-founder Xin Wei shared a few details with In Compliance. “Our sensor nodes are numbered in our specific Adaptive Duty Cycle Determination System for a very LO PO (power management) reducing energy waste from the harvester itself, solving the high power consumption that block everyone,” he wrote. “We don’t over heat any battery while charging since an intelligent microcontroller communicates constantly with the device, delivering on time and stopping on its own.”

WEI emphasized the differences between K3OPS technology and similar products. Although the details are under wraps, he did tease us with this bit of information: “Just understand, there is a difference between datas transmission, ‘the numeric’ and RF-DC conversion. And don’t think that the so called waste from a cellphone can charge a phone. It’s not even fiction, it’s impossible.” We look forward to learning the complete details in July.]