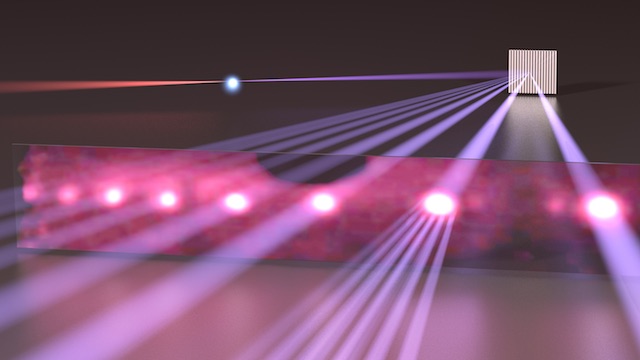 Scientists from Columbia Engineering have designed a new type of Kerr frequency comb generator. This generator integrates the laser with the microresonator for the very first time, resulting in a drastically smaller device with lower power requirements. These innovations should allow scientists to integrate their invention onto photonic chips that are both energy efficient and small.

The laser is designed in a way that allows half of the laser cavity to be based on a semiconductor waveguide section that has a high optical gain. Meanwhile, the second half is based entirely on waveguides. The waveguides are made up of silicon nitride, which is a very low-loss material.

Microresonators are generally small rings or discs. They are typically constructed from glass, silicon nitride, or silicon. When scientists bend a waveguide into the shape of a ring, it results in an optical cavity. Light can circulate multiple times within these cavities, resulting in a build-up of excess power. Scientist can generate a whole frequency comb in the ring using a single-frequency pump laser input.  Additionally, engineers discovered that microresonators with distinctly low loss can create a powerful reflection coming back from the ring itself. This is created when light circulates through the ring and builds up in intensity.

One of the key challenges of the research was reducing the optical loss in the silicon nitride waveguides. The lower the optical loss, the less laser power scientists would need to generate a frequency comb.

The optics used in the design fit into a millimeter-scale area. The device is so efficient that it is capable of being powered by something as simple as a typical AAA battery. This design and its versatility lends itself to an assortment of applications. Scientists believe the device could be easily integrated into spectroscopy for locating biological or environmental markers, ultra-precise optical clocks, or laser radar/LIDAR in autonomous cars.

The next phase of research involves working on integrating the device into assorted applications, including wearable technologies. Scientists still need to improve the designs for operation in additional wavelength ranges. This will include mid-infrared, and could be integral for devices that sense chemical and biological agents.