The Internet of Things goes skin deep, literally. Implanted medical devices, smart contact lenses, smaller wearable devices, and even credit cards – can now speak to your mobile device thanks to a team of engineers at the University of Washington.

Using their newly developed Interscatter communication, appropriately named for its combination of inter-connectivity and backscatter technology, the team discovered how to transform wireless transmissions from one technology to another. This is the first time that bluetooth transmissions have been used to successfully create Wi-Fi signals using backscatter communication.

Interscatter works by absorbing or reflecting bluetooth signals from common devices, such as smartphones or tablets – that serve as both source and receiver, to transform the transmission into Wi-Fi data packets. Because Interscatter technology enables high bit rates (which allow for a faster and shorter data transmission) the Bluetooth enabled data packets consume only tens of microwatts of power which is almost 10,000 less than conventional Wi-Fi chipsets. 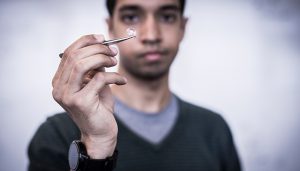 To demonstrate the technology, the team used three commodity based products to develop proofs-of-concept: 1) a smart contact lens, 2) an implantable neural recording device, and 3) smart credit cards. In the instance of a smart contact lens, incorporating interscatter communication could enable biomarker measurements such as glucose levels and cholesterol data to be reported back to a device for better health management.

The team’s research is described in a recent paper, Inter-technology backscatter: Towards Internet Connectivity for Implanted Devices and  could lead to significant breakthroughs in the treatment of medical conditions such as epilepsy and Parkinson’s disease, and that’s just getting started. Their work was funded by the National Science Foundation and Google Faculty Research Awards, and will be presented next week at the annual conference of the Association for Computing Machinery’s Special Interest Group on Data Communication (SIGCOMM 2016) in Brazil.