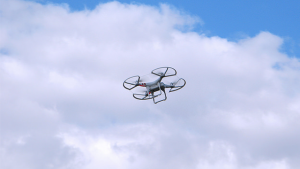 Miniature drones could be used in so many applications: military surveillance, monitoring disaster areas, delivering small packages, and forecasting weather, to name a few. While engineers have made many improvements on drone technology recently, small drones still have trouble avoiding collision, especially in confined spaces. While larger drones can be equipped with digital cameras, this equipment is too bulky for the tiniest drones. Swiss researchers have now developed a tiny motion sensor to help small drones avoid crashing into objects or each other.

Dario Floreano, director of the Laboratory of Intelligent Systems at the Swiss Federal Institute of Technology (EPFL), was inspired by insect eyes, called “compound eye ommatidia.” Flying bugs don’t crash into each other because they see using many tiny eyes that each form their own images by detecting changes in the way light is reflected off of moving objects (or static objects while the insects are in motion). With this in mind, Floreano’s team developed motion sensors by placing a lens on top of three electronic photodetectors. By combining the measurements from each photodetector, the devicecan sense the speed and direction of any motion in its view. The team also developed algorithms for processing the signals in order to compute the distance between objects and the time until a potential collision.

The new sensor detects motion three times faster than flying insects, even in poorly lit rooms. The device weighs just two milligrams and is two cubic millimeters tall, which makes it small enough to work on even the tiniest drones. The researchers also created a flexible patch containing many artificial eyes. This patch could be attached to curved surfaces, which means the motion sensors could also be stuck to robots, vehicles, or many “Internet of Things” objects in the future.