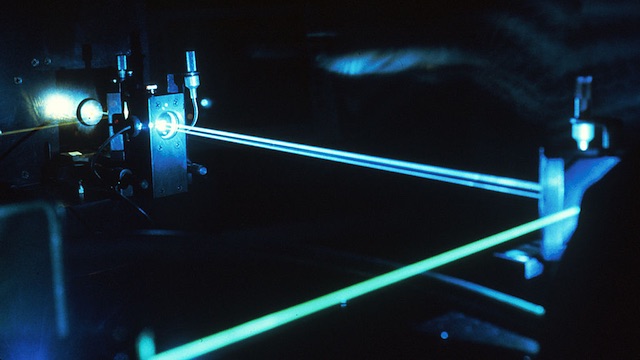 Fiber optic cables have been hailed as the future of information technology. Users love them for their speed and efficiency (if not the endless miles of cables needed for them to work effectively). But the days of hoping your town would be graced with fiber optic cables may be coming to the end faster than anyone could have imagine.

Scientists at Penn State University have invented a new and bold way to effectively process information technology, using lasers. Instead of dealing with cables and all the inherent complications that come with them, these engineers envision a world where data is transferred by small but powerful lasers. Sound like the stuff of science fiction? It’s closer to becoming the norm than you might think.

Professor Mohsen Kavehrad has designed a prototype that relies on infrared lasers to transmit data. Specially designed lasers set on server racks will beam data to photoreceptors, which will decipher the information. Need to redirect the lasers? Moveable mirrors mounted on the top of the server racks will take care of that.

So far Professor Kavehrad, who has dubbed his invention ‘Firefly,’ has proven that lasers are a viable alternative to fiber optic cables. The design set up in the labs already shows how effectively infrared lasers can send data via the air. The team behind the system effectively proved that terabytes of information could be sent this way, with no pesky cables to get in the way. The question now becomes whether or not this design could work on a much larger scale — or even one day replace fiber optics.

The first issue is finances; it cost $20,000 to build the prototype alone, which doesn’t make this an investment for the fiscally challenged. Another concern is vibrations. As they process and transfer data, server racks tend to vibrate. When you’re relying on highly pinpointed lasers to pass along information, even the slightest vibration could cause serious problems.

These concerns aside, the prototype is already generating interest from niche markets (think supercomputers); and with some tweaking and a look at mass production, one day we could say goodbye to fiber optic cables — and hello to lasers.