Increasing the Intensity of Nanowire LEDs 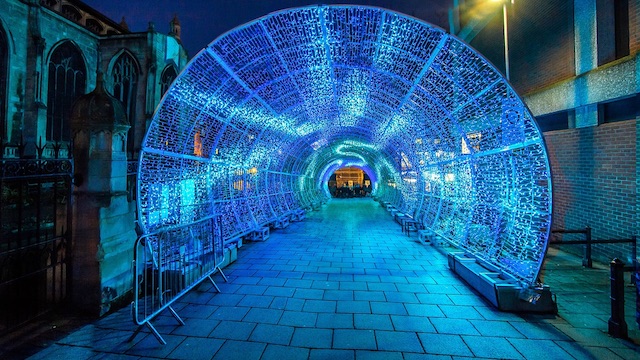 Scientists from the National Institute of Standards and Technology (NIST) have created a new type of ultraviolet light-emitting diodes (LED) that are far more powerful than traditional LEDs. Researchers believe this technology could have a wide range of different applications in a number of fields, including water purification, polymer curing, and medical disinfection.

When an electron comes into contact with a hole, a process called electroluminescence occurs, wherein the energy from the combination is released in the form of light. To finish off their creation, scientists included a small amount of aluminum in the shell layer, to help reduce losses from light reabsorption and electron overflow. The aluminum also helps to keep the electrons located in the nanowire core, which can help boost the electroluminescence up to five times.

“The role of the aluminum is to introduce an asymmetry in the electrical current that prevents electrons from flowing into the shell layer, which would reduce efficiency, and instead confines electrons and holes to the nanowire core.”

Research shows that the nanowire test structures came in at roughly 440 nanometers long, and have a shell thickness of about 4o nanometers. When you add in the shells, the final construction of the LEDs were almost 10 times larger in size. And this is just the first step in this ongoing research. Even now, other companies are hard at work designing high-powered micro-LEDs with the help of nanowires. NIST already has a Cooperative Research and Development agreement with one of the companies, and are working to create dopant and structural characterization methods.

Going forward, scientists hope to develop deals with scanning-probe companies. They will work together to use NIST LEDs in their probe tips. Additionally, scientists intend to demonstrate prototype LED tools that can be extensively used in a variety of different emerging technologies.