Improving the Heat Tolerance And Efficiency Of Devices 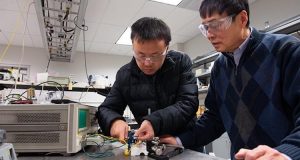 Penn State University engineers have come up with a new technique for making devices more efficient and tolerant of heat. Researchers designed a scalable method that can be used to increase both the electric breakdown strength as well as the electric storage efficiency of a device’s electrical system. This is unprecedented, as traditionally one of these properties increasing inevitably leads to a decrease in the other.

This method is the first that is cost-efficient enough to be scalable. Previous iterations of this technology were deemed too expensive to scale.

“What we have done is to use interface effects in nano-dopants to increase both the storage efficiency and electric breakdown strength with a very small quantity of dopants and at a low cost. A lot of people think they need to fill the capacitor with a lot of fillers to achieve the greater energy storage efficiency, but we showed you can accomplish it in the opposite direction, that is, by using very low-volume content fillers with very low-cost materials, which can also lead to greater breakdown strength. This keeps the cost low and makes this highly scalable.”

By improving the strength of the electric breakdown in the capacitor, the device will be able to tolerate far higher temperatures than before without experiencing any negative impact on its performance. Engineers believe this innovation will prove a useful advancement in a variety of different applications such as electric grids, industrial drills, and electric cars.

For now, engineers will continue to work on streamlining and improving their new technology. The next step will be devising even more efficient methods of scalability.