Improving The Efficiency of LED Lightbulbs by Mimicking Fireflies 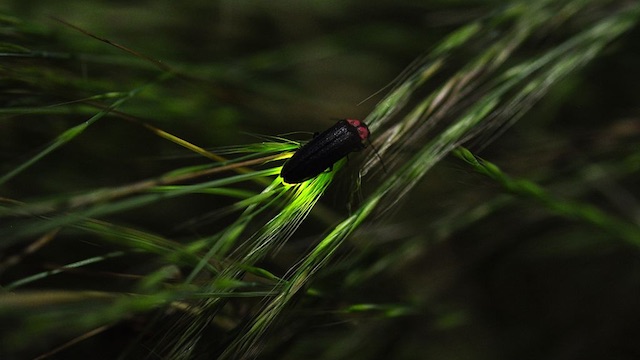 Scientists from Penn State University have created a new type of light-emitting diode (LED) lightbulb that could change the way we light our homes. The design of the new LEDs mimics the structures used by fireflies in nature, and could improve efficiency while reducing the cost of keeping the lights going brightly.

Scientists got the idea when they realized that fireflies face the same issue as LEDs; they often have difficulty releasing the light they create, since light has the ability to reflect backwards. When this happens, the light created is lost. LED lights have dealt with the conundrum by texturing the surface with microscopic projections, known as microstructures. These allow more light to escape from the structure, producing a brighter and more consistent light.

This is similar to how a fireflies’ lantern operates, with one crucial difference. While the microstructures on LED lights are perfectly symmetrical, the ones on firefly lanterns are not. In fact, the slants are so dramatic that they can end up looking distinctly uneven and off-center.

Chang-Jiang Chen, doctoral student in electrical engineering and lead author in the study

Intrigued, scientists decided to take a page out of nature’s book — and they were shocked by the results. It turns out that the asymmetrical pyramids used in the microstructures of a firefly lantern actually improve light extraction efficiency by about 90 percent.

Scientists believe this dramatic increase is due in large part to the greater surface area offered by the asymmetrical pyramids. This allows the surface to have a much more significant interaction with the light, meaning less ends up trapped as a result. Additionally, the different sizes of slopes on the pyramids increases the randomization effect of the reflections, which grants the light a second chance to avoid being trapped.

Researchers believe this new discovery could have a profound impact on the LED industry, which is rapidly expanding as the need for clean energy grows. Scientists have proven they can easily modify the traditional method of creating LED lights so that they can achieve the ideal asymmetrical design. They have submitted a patent for their research, and will next work on commercializing the new design.