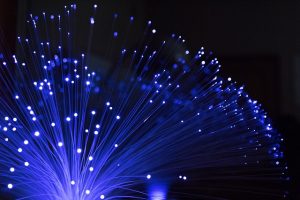 Image by Giorgio Giorgi from Pixabay

While optical data has proven a blessing in many ways, it has a few drawbacks — namely, it can at times end up being too fast. This prevents it from being properly analyzed. The solution is to slow down the data (just slightly) so it can be processed and routed accordingly.

That’s where an acoustic buffer comes in handy. Since sound waves travel slightly slower than light waves, converting optical data in sound waves would provide an elegant solution to this problem. And now it looks like a team of engineers has worked out a way to turn this theory into reality.

Scientists from the University of Sydney have designed a very special new type of microchip. This microchip is capable of converting light into audio, a process that would speed up data transfer and streamline are already overtaxed communication systems.  Although the chip is still in the conceptual phase, scientists believe that this could be a huge breakthrough in optics and data transfer.

The proposed chip is designed to very specific parameters. Light can pass through the microprocessor in about two to three nanoseconds. From there, data can be stored for up to 10 additional nanoseconds in acoustic form. This would give the chip much-needed time to process the information and move it along at a speed that other computer chips would be able to understand. Once it’s been looked over, the data would return to its original light form and race along and its previous high speeds — only now having been thoroughly analyzed and processed.

Our system is not limited to a narrow bandwidth. So unlike previous systems this allows us to store and retrieve information at multiple wavelengths simultaneously, vastly increasing the efficiency of the device.

Dr. Birgit Stiller, research fellow at the University of Sydney and supervisor of the project

As fiber-optics are increasingly used, this could prove to be an enormous benefit to technology, particularly on a commercial level. In a word, this microchip could ultimately lead to a faster internet. And with more and more people logging on each day and demanding more and more data, speedier and more streamlined internet capabilities can’t come soon enough.