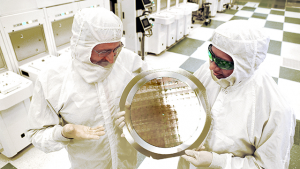 IBM has just announced a milestone for the semiconductor industry that will enable 20 billion transistors to be placed on a chip the size of a fingernail. In 1965 Gordon Moore, co-founder of Intel, predicted that the number of transistors that could be placed on a computer chip would double every two years. For the most part, this has been true, and electronics have accordingly become smaller, cheaper, and more powerful every year. However, some engineers have predicted that Moore’s law would come to an end in the next few years because of the physical limitations of exponential growth in the real world.

On Thursday, IBM unveiled a chip that is keeping Moore’s law alive, with FinFET transistors that measure just 7 nanometers, which is half the size of the current 14 nanometer standard for commercial chips. In order to make such small transistors, the researchers used new materials and techniques. The chip is made of Silicon-Germanium, rather than just silicon, and was created with an advanced technology called extreme ultraviolet lithography. It was produced at the State University of New York (SUNY) Polytechnic Institute in Albany, as part of a $3 billion, five year investment in chip research and development by IBM, along with the state of New York, GlobalFoundries, Samsung, SUNY, and other equipment suppliers.

“For business and society to get the most out of tomorrow’s computers and devices, scaling to 7nm and beyond is essential,” said Arvind Krishna, senior vice president and director of IBM Research, in a statement. For now, the chip is just a prototype, and commercial 7nm chips are not expected for at least another two years. If the chip works the way it should, it will bring about at least a 50 percent performance improvement for the next generation of computing technologies.