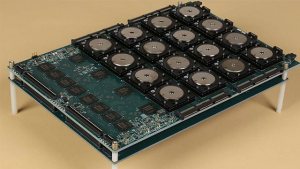 This month at a lab in Silicon Valley, IBM displayed a system that is like a digital brain. The machine, called TrueNorth, is made up of chips that were inspired by neurons, the cells that transmit information in biological brains. The cognitive computing group at IBM started the project in 2008, with $53.5 million in funding from Darpa, the Department of Defense’s research agency.

The technology has been on display during a three week boot camp in August for researchers. At the end of the boot camp, the machine will be broken down into 48 separate machines built around TrueNorth processors, so that academics and researchers can bring the digital “brains” back to their own labs around the world, where they can continue to develop software for the chip.

TrueNorth is different from traditional chips, which are wired to execute specific instructions. Instead, this brain-inspired chip handles much simpler pieces of information called “spikes,” which are like pulses of electricity in the brain. This results in a simpler architecture that consumes much less energy. The chip contains 5.4 billion transistors, but it only uses 70 milliwatts of power. That’s similar power consumption to a standard computer processor, but with about five times as many transistors.

Developers at the boot camp are using the chip to run “deep learning” algorithms for Artificial Intelligence (AI). Deep learning, such as FaceBook’s facial recognition, requires lots of processing power, which is usually provided by large data centers. TrueNorth is different because it can run deep learning algorithms in small spaces with very low electrical power. This new chip could help move some of the processing power onto phones and other electronic devices, taking the burden away from data centers and making AI much more widely available.