Inventor and CEO of Tesla Motors, Elon Musk, has introduced a new model of transportation, referred to as the Hyperloop, capable of achieving ultra high speeds using thermodynamics, fluid dynamics, and electromagnetism. In a new report, Musk shares plans to construct this hyper highway in less than 10 years for less than one 10th the price of current California transit plans.

To achieve this vision, it would require the construction of an above ground intercity tube system built from prefabricated tubing on top of pylons. The structure could be constructed along the bay state’s interstate properties and would implement solar panels for self-powering capabilities. 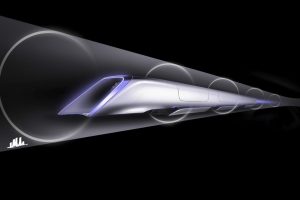 The capsule, or pod, that transports commuters at speeds of over 750mph would be constructed from aluminum and equipped with air bearings to push air away from the unit preventing the potential for the effect of the Kantrowitz limit to occur within the tubes.

Although the idea for Hyperloop has been introduced by Musk, it has been worked on and carried out through a mesh network of individuals who must apply for a position within the open source team and will only receive payment once the idea has been monetized. Over 100 engineers have banded together to make this vision a reality that will revolutionize the future of transportation.