Advanced microfluidic chips could soon make sophisticated medical tests portable and inexpensive. These tiny chips use physiological markers to identify cancer cells, bacteria, or viruses. Engineers at the Georgia Institute of Technology have developed technology that could make portable medical diagnoses possible. The chip developed by the Georgia team works with a similar principle to the way cell phones work—using a unique identifying number. While a cell phone uses a unique number to separate itself from other phones on a network, the chip uses a simple circuit pattern with three electrodes to assign a unique identifier to each cell that passes through it. Fatih Sarioglu, a Georgia Tech researcher, said:

We are digitizing information about the sorting done on a microfluidic chip. By combining microfluidics, electronics and telecommunications principles, we believe this will help address a significant challenge on the output side of lab-on-a-chip technology. 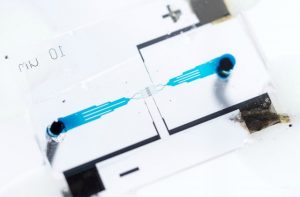 Close-up image shows a hybrid microfluidic chip that uses a simple circuit pattern to assign a unique seven-bit digital identification number to each cell passing through the channels.

The new technique, called microfluidic CODES, also captures information about the size of the cells and the speed at which they move. There is a grid of micron-scale electrical circuitry beneath the microfluidic chip. Current flowing through the circuitry creates an electrical field in the channels above the grid. When a cell passes through one of the microfluidic channels, it creates an impedance change in the circuitry that provides information about the cell’s location, size and the speed at which it is moving through the channel. These capabilities could be used for automated counting and digital analysis of cells in a sample. Sarioglu explained, “By judiciously aligning the grid pattern, we can generate the codes at the locations we choose when the cells pass by. By measuring the current conduction in the whole system, we can identify when a cell passes by each location.”

The end goal is to create inexpensive chips that could be used to bring diagnostic testing to any location. Chips could be contained in simple cartridges and the system’s processing could be handled by a smartphone. “It will be very exciting to scale this up, and I think that will open up the possibility for many different assays to become accessible electronically,” Sarioglu said. “Decentralizing health care is an important trend, and our technology might one day allow many kinds of diagnostic tests to be done beyond hospitals and large medical facilities.” The research is described in a paper that published in the journal Lab on a Chip.