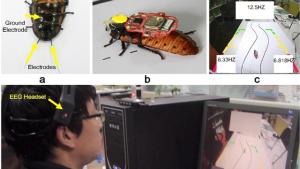 A group of engineering students from China have developed a way for humans to use their thoughts to direct the movements of cockroaches. The interface sends signals from a human mind to the brain of a cockroach. The project is in early development, with the students directing roaches to walk in paths in a laboratory setting, but the end goal is to use the cyborg cockroaches for search-and-rescue missions.

Oddly enough, creepy crawly cyborg research has been gaining momentum in the last year. First, in November 2014, scientists from North Carolina State University outfitted cockroaches with tiny electronic backpacks to direct the roaches toward sounds in disaster recover efforts. Then in March 2015, Texas A&M University beefed up the bug backpacks and turned beetles into flying drones that could be steered by remote control.

Now, the students from Shanghai Jiao Tong University in China performed cockroach brain surgery by implanting an electrode into a nerve that picks up information from a cockroach’s antenna. A human then wears a wireless headset that records their brain waves. When the human thinks about the intention to move, a computer decodes the electrical signals and then uses Bluetooth technology to transmit the messages to the roach’s electronic backpack, which causes the implanted electrode to stimulate the antennal nerve. In this way, the roach receives the message from a human mind and it moves as directed. The team is now working on fine tuning the process so that multiple insects can be controlled at the same time.