How to Turn Pollution into Batteries 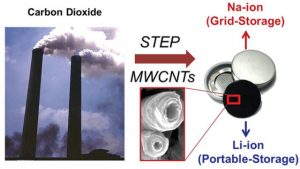 Although it is possible to remove greenhouse gases from the air, the process has been prohibitively expensive. But what if the same gases that pollute the environment could be broken down into valuable materials? A team of researchers from George Washington University and Vanderbilt University has come up with a possible solution, by capturing carbon dioxide (CO2) and breaking it down into carbon nanotubes that boost the capacity of batteries.

In a scientific paper that published in ACS Central Science earlier this month, the researchers explain their method, a solar thermal electrochemical process (STEP), which author Stuart Licht previously described in a 2009 research article. Now, Licht and his colleagues have demonstrated a practical way to use recycled pollution. They wrote, “This work demonstrates that ambient CO2, considered as an environmental pollutant, can be attributed economic value in grid-scale and portable energy storage systems with STEP scale-up practicality in the context of combined cycle natural gas electric power generation.” 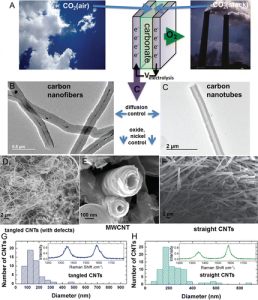 Not only is the system good for the environment, but the researchers also say it is more cost-effective than existing techniques for producing carbon nanotubes. They used the carbon nanotubes to make anodes (which are typically made of graphite) and found that the resulting batteries exhibited high performance and durability. Lithium-ion batteries made with carbon nanotubes showed a moderate increase in capacity, and sodium ion batteries—an emerging technology for grid energy storage—quadrupled in capacity, lasting 600 cycles without degrading.

Besides batteries, the researchers also propose a design for scaling up their system so it could be built right into a power plant. STEP would be attached to the smokestacks, where it could capture all of the CO2 and then split it into carbon nanotubes and pure oxygen. The carbon would be used for grid storage, while the oxygen could be used for combustion. As the researchers wrote, “This provides a bridge toward associating economic value to CO2, with a revenue window controlled by the cost of conventional battery technology per kWh.”