How to Prevent Perovskite Solar Cells from Degrading 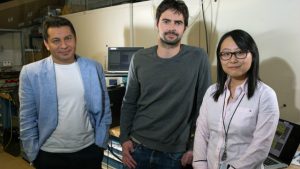 From left: Aditya Mohite, Jean-Christophe Blancon and Wanyi Nie are researchers at Los Alamos National Laboratory who discovered that cooling and time in the dark can preserve perovskite solar cells.

Solar cells made from perovskites are nearly as efficient as silicon cells, but at a lower cost because they are easy to fabricate. Several research groups have improved perovskite solar cell performance in lab environments, but this promising technology has not yet been resilient enough to be practical in the real world. Now, a team at Los Alamos National Laboratory has figured out why these solar cells tend to degrade in sunlight, and better yet—they have also discovered a solution.

It turns out that photo-degradation in perovskite cells is a purely electronic process due to charge accumulation. Contrary to previous assumptions, they discovered that there is no chemical damage to the material’s crystal structure, so the damage can be prevented and repaired. If they are given some time to rest in the dark, the cells actually heal themselves. The researchers also found that controlling the temperature by just a couple dozen degrees can stop the photo-degradation or encourage the self-healing process.

The researchers described their findings in a paper, “Light-activated photocurrent degradation and self-healing in perovskite solar cells,” which published in Nature Communications on May 16.