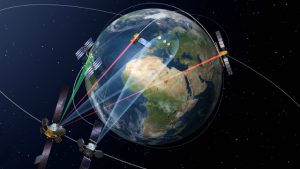 The European Space Agency (ESA) has launched new satellite communication technology that uses lasers to send data from space to Earth at unprecedented rates. This ambitious new program, called the European Data Relay System (EDRS), is nicknamed the “SpaceDataHighway” and will be the foundation for Europe’s first optical communications network.

To start, the system will be used for Earth observation satellites, which provide images of the planet from outer space, which is especially helpful during disaster relief efforts. They can be used to track weather patterns or even to track goods that are shipped overseas. Currently, these low-orbit satellites can only transfer their data to ground stations when they to pass by overhead, which only happens every ninety minutes. EDRS will drastically cut down on these delays and should be able to send data back to Earth in near real-time.

On January 29, EDRS-A, the first element of EDRS launched from Kazakhstan and reached its much higher geo-station position of 22,370 miles about Earth. At this high position, it will have a much broader view of the planet so it will be easier to send data back to its ground stations in the United Kingdom. EDRS will collect the information from low-orbiting satellites via laser and then immediately send the data down to ground stations with a Ka-band radio transmitter. 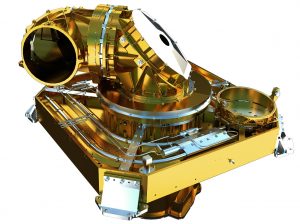 The laser terminal was developed by German company Tesat. The ESA describes it as “essentially an autonomous state-of-the-art telescope, with mirrors to help the laser lock on to its mark in lower orbits from its own position in geostationary orbit.” It can send data at much higher speeds than the radio links typically used by satellites: 1.8 Gbit/s. To put it in perspective, that is 90 times faster than typical internet connections.

The project is a private-public partnership between the space agency and Airbus Defence and Space, a French company that will operate the service. Although the high-speed data transfer is first being used for Earth observation by the ESA and in the International Space Station, Airbus also plans to offer a commercial service.