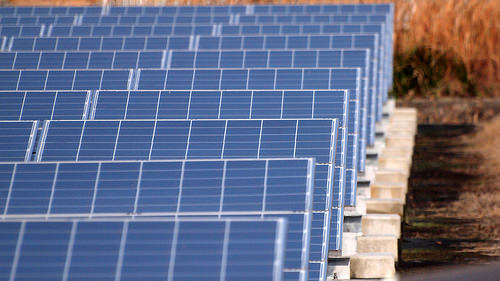 A team of engineers at Stanford University have found a way to make the metal wiring in solar cells nearly invisible to incoming light. Typically, the wiring in solar cells reflects light away from the cell like a mirror. Obviously, this is not efficient for a device that is supposed to be absorbing light and harnessing its energy to make electricity. This new way to hide wires could improve the relative efficiency of solar cells by as much as ten percent.

Lead researcher Vijay Narasimhan explains, “Using nanotechnology, we have developed a novel way to make the upper metal contact nearly invisible to incoming light. Our new technique could significantly improve the efficiency and thereby lower the cost of solar cells.” The design uses silicon nanopillars—an emerging type of metamaterial is excellent at trapping light. To test their idea, the researchers created a model of a solar cell with a thin film of perforated gold on top of a sheet of silicon. They created silicon nanopillars, which poked through microscopic holes in the gold and acted as funnels to capture light and guide it into the silicon substrate.

To design solar cells, the semiconductor and the metal contacts are typically built separately, according to the researchers. However, their suggests that it would be better to take a hybrid approach where the two materials are designed and fabricated together.