Harnessing the Magnetic Nature of Light for Terahertz-driven Devices 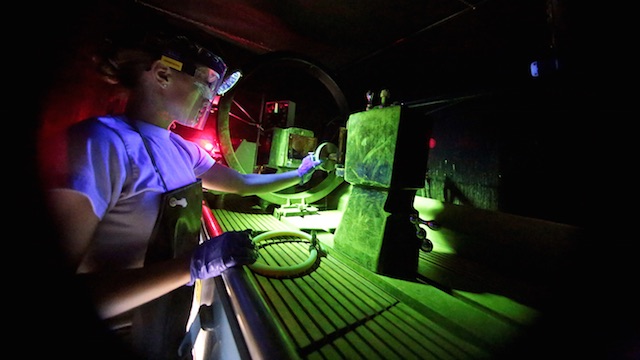 Scientists from The University of New South Wales Sydney and The University of Sydney have demonstrated a new way to enhance magnetic responses in a dipole emitter by a sub-wavelength fiver. This research, and additional studies on dielectric sub-wavelength particles have provided scientists with a new platform with which to work on magnetic light.

Researchers experimentally demonstrated an enhanced magnetic dipole source in the terahertz frequency range. The fiber is placed next to a hole in a metal screen, which enhances the radiation power more than one order of magnitude. This is due to the excitation of the Mie-type resonances found in the aforementioned fiber. The scientists when on to demonstrate that the system was roughly equivalent to a double-fiber system when excited by a magnetic source.

The optical fiber system is coupled with magnetic dipole. When combined, it can be construed as a unit cell of metasurfaces. The metasurfaces can then be used for the manipulation of terahertz radiation. This also provides proof-of-concept regarding the possibility to achieve enhanced radiation of a dipole source, once it it in proximity of a sub-wavelength fiber. Additionally, the unit cell can be easily scaled down to optical frequencies. This could provide a huge boon to scientists working on developing integrated nanophotonic devices including nanoantennas and lasers on fiber.

Further research proved that the aperture-fiber system created by the scientists was equivalent to that of an MD-double fiber system. This also confirmed the theory that the experimentally measured enhancement ratio was a fair approximation of the THz Purcell enhancement of an MD source in the vicinity of subwavelength fibers. Scientist were able to approximate field uniformity in the aperture as well as the representation of the aperture as an MD source.

Enhancing the forward emission relies on two distinct factors. These are the loss of the fiber material, as well as refractive index. A lower material loss and higher refractive index could also be used to enhance the emission further. Because of this, the ideal material in the experiments would be silicon. Silicon has lower losses and a high refractive index, especially when compared to the soft glass used in the scientist’s work. Unfortunately, the diameter required for such an enhancement has proven extremely difficult to achieve so far — a problem researchers continue to struggle with.

Despite some setbacks, scientists are optimistic about the future applications of their discoveries. Nanotechnologies in particular will significantly benefit from these advancements.