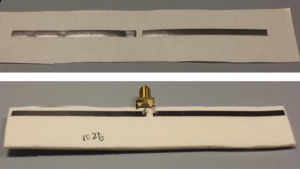 A recent development in the emerging technology of printed electronics could bring network communications to many new cheap devices. Researchers at the University of Manchester, along with graphene producer BGT Materials Limited, have printed radio frequency identification (RFID) antennas on paper.

Ever since it was first isolated using Scotch tape at Manchester in 2004, scientists around the world have been fascinated with graphene—a conductive 2-D material that is strong, fast, cheap, and impossibly thin. These unique properties make it an ideal material for everything from jet planes to solar cells, flexible electronic displays, and computer chips. Unfortunately, the wonder material has not made it out of labs and into the real world yet because it is extremely difficult to manipulate.

Using a new technique, the University of Manchester researchers have demonstrated that printable graphene is now ready for commercial use in low-cost radio frequency applications such as RFID tags and wireless sensors. In the quest for inexpensive flexible electronics, other researchers have previously tried creating conductive ink out of graphene using a high-heat process called annealing to incorporate binders to make the ink stick. However, annealing limits the surfaces onto which the ink can be printed because the high temperatures destroy materials like paper or plastic. The Manchester researchers have solved this problem by developing graphene ink without binders. In a paper published in the journal Applied Physics Letters, the researchers wrote that their process is “simple and can be carried out in low temperature (100 °C), significantly reducing the fabrication cost.” After drying the ink, the researchers compressed it with a roller, which increased its conductivity by more than 50 times, making it twice as conductive as previous versions of graphene ink made with a binder.