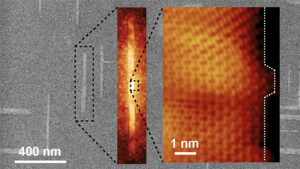 Although graphene has been touted for its unique properties that make it an exciting potential material for electronic devices, engineers have struggled to manipulate it. Graphene—a sheet of carbon just one atom thick—is strong, thin, and incredibly conductive. Now, researchers at the University of Wisconsin-Madison have discovered a new method for making graphene nanoribbons that can be used in semiconductor electronics.

Previously, researchers have been unable to grow graphene nanoribbons with the precise “armchair” edges and the long, extremely narrow size that is required for semiconductor applications where current must be switched on and off. Now, the University of Wisconsin-Madison researchers have succeeded. They grew the graphene nanoribbons on a conventional germanium semiconducting wafer by using a very slow growth rate for graphene crystals, with a technique called chemical vapor deposition.

“What we’ve discovered is that when graphene grows on germanium, it naturally forms nanoribbons with these very smooth, armchair edges,” said researcher Michael Arnold. “The widths can be very, very narrow and the lengths of the ribbons can be very long, so all the desirable features we want in graphene nanoribbons are happening automatically with this technique.” The resulting nanoribbons could be used in hybrid integrated circuits to make electronic devices that take advantage of graphene’s extraordinary properties.

The researchers are now working on patenting their technology and improving the process to control the nanoribbons with even more precision. This work is described in a research paper in the journal Nature Communications.