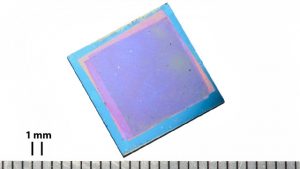 Scientists in Switzerland have discovered yet another unique property of graphene, the 2D version of carbon. Not only is graphene fast, strong, thin, and lightweight, but now we know that it is also both transparent and opaque to radiation. The Swiss team took advantage of this property to develop a microchip that filters out unwanted radiation. Their device, called an optical isolator, works in the previously untapped frequency band called the terahertz gap. With further development, wireless devices that use the chip to communicate via the terahertz bandwidth could transmit data ten times faster than today’s gadgets.

Our graphene based microchip is an essential building block for faster wireless telecommunications in frequency bands that current mobile devices cannot access.

The new microchip is so effective because three layers of graphene filter out unwanted radiation. It works in a similar way to polarized sunglasses, by only letting certain radiation through, depending on the signal’s direction and orientation. The results of this joint project between EPFL and the University of Geneva are published in Nature Communications, in a paper called “Near optimal graphene terahertz non-reciprocal isolator.”