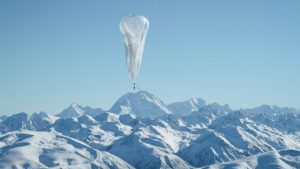 Alphabet’s X division (formerly Google X) is the team behind experiments such as a self-driving car and a drone delivery plan. One of the group’s wildest concepts, called Project Loon, is a plan to provide internet connections all over the world by beaming Wi-Fi down from balloons that are powered by the wind and the sun. As wacky as it might sound, Astro Teller, the head of X, just announced that Project Loon has passed the initial phase of testing and service testing will launch in Indonesia and Sri Lanka this year. (Interestingly, Sri Lanka’s government is trading dedicated spectrum for a 25% holding in the local unit of Google’s Project Loon.)

In a TED talk about so-called moonshot projects and embracing failure, Teller said that after much trial and error, the group has designed a balloon that traveled around the world 19 times in six months and is able to deliver internet speeds of 15 megabits-per-second.

We’re trying to create balloon­-powered Internet — a network of balloons in the stratosphere that can beam an Internet connection to rural and remote areas of the world. We hope this could connect as many as four billion people who today have little or no internet connection. But you can’t just strap a cell tower to a balloon and put it up in the sky. The winds are too strong; it will be carried away. The balloons are too high up to be tied to the ground and those tethers would be dangerous to planes. Here comes the crazy moment: What if, instead, we let them drift and taught them how to sail the winds to go where they needed to go?

While traveling a dozen miles above the Earth’s surface, the balloons use software algorithms to determine where they need to go, and then move into a layer of wind that is blowing in the right direction. The balloon’s electronics are powered by a flexible solar array that produces 100 watts of power in full sun, which is enough to keep the electronics running and store some energy for charging a battery that powers the electronics at night.

Project Loon’s team is now in commercial discussions with telecom companies around the world. Now that they have found a balloon design that works, Teller’s team is working on reducing the cost of the balloon, in order to reach their ultimate goal of bringing internet to billions of people in the next five to ten years.