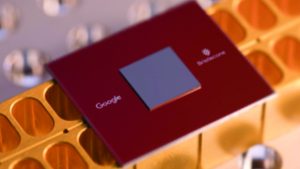 Researchers from the Google Quantum AI lab have unveiled a powerful new computer processor. Called Bristlecone, the processor was revealed at the annual American Physical Society meeting in Los Angeles, California. Experts believe that the quantum processor is a major step forward in Googles’ quest to create a quantum computer capable of solving real-world problems.

Bristlecone was designed with a very specific purpose: to provide a testbed for research into system error rates. Additionally, the quantum processor is being used to investigate scalability of qubit technology, not to mention an assortment of applications into quantum simulation, optimization, and machine learning.

The new quantum processor is based on the design principle of preserving the underlying physics of previous 9-qubit linear array technology. This technology demonstrated low error rates for readout, single-qubit gates, and two-qubit gates. Bristlecone relies on the same principle when it comes to coupling, control, and readout. However, in this case it is scaled to a square array of 72 quits. This size was selected so as to best demonstrate quantum supremacy, investigate first and second order error-correction (thanks to the surface code), as well as to help facilitate quantum algorithm development on real-life hardware.

The theory team at Google has successfully developed a benchmarking tool to quantify the quantum processor’s capabilities. As a result, they can assign a single system error by applying random quantum circuits to the device. The sampled output distribution is then checked against a classic simulation. If the processor operates with a low enough percentage of error, it should in theory be capable of of outperforming modern supercomputers. This goal has not yet been achieved; nevertheless, the team has calculated that quantum supremacy can be demonstrated with 49 qubits, a two-qubit error below .5%, and a circuit depth exceeding 40.

Outperforming modern supercomputers remains one of the key objectives for the team at Google. They believe that Bristlecone will be able to achieve a similar performance to the best error rates found in the 9-qubit device. The most pronounced difference? With Bristlecone, that performance would cover 72 qubits. Researchers hope that with further investigation and experimentation, their dreams of outperforming supercomputers will soon become a reality. Once that is achieved, quantum computing will be able to take off in ways previously unimagined.