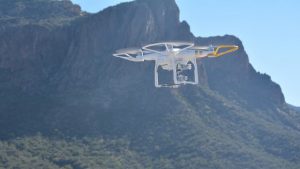 New information about Google’s internet drone project have been revealed. Google began testing Project Skybender in New Mexico last year, with the goal of using solar-powered drones to deliver high-speed internet all over the world. Now, Google is testing the technology that could be used to provide the internet connections: millimeter wave radio transmissions.

This frequency range is especially attractive because it’s not crowded like the existing cellphone spectrum. This band of the wireless spectrum could support 5G wireless internet in the future, because theoretically, it can be used to transmit data 40 times faster than today’s 4G LTE systems. However, there are several drawbacks and challenges that need to be overcome.

According to the European Telecommunications Standards Institute, regulations for millimeter wave radio “differ greatly from country to country, ranging from no regulation to full regulation. There is a lack of key components leading to high equipment costs. There is huge variety in the types of equipment and applications using this spectrum and there is still a lack of confidence in the technology.”

Google is currently testing at 28 GHz, and at this frequency the waves would have a very short range, so Google would need to focus the transmissions, but using a phased array would introduce power concerns. Last year, Google built several prototype transceivers at Virgin Galactic’s isolated hangar space in New Mexico. Now the project team is testing them with Google-owned Titan’s solar-powered drones, as well as an aircraft called Centaur, which can switch from manned, unmanned and augmented modes of operation. The FCC has granted Google permission to continue tests until July 2016.