Giving Prosthetics the Sense of Touch 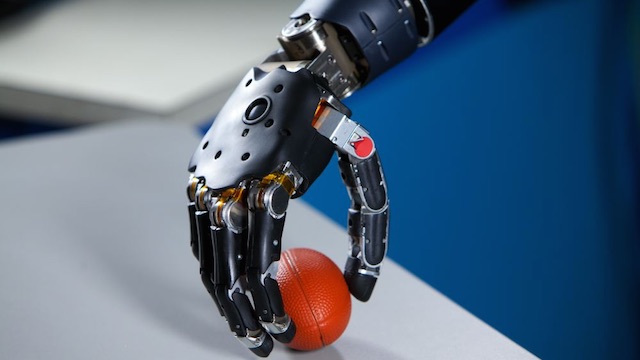 Researchers from Stanford and Seoul National University have created an artificial sensory nerve system. The system could one day give prosthetic limbs and robots a sense of touch. The artificial nervous system is capable of activating the twitch reflex in a cockroach; it can also identify all the letters in the Braille alphabet. It is considered a major step forward in the world of artificial skin that could be used in a variety of applications.

The team of scientists built the artificial sensory nerve system so that it could be embedded in artificial skin. This skin would work for neuro-prosthetic devices as well as in soft robotics.

There are three significant factors that define the new nerve circuit. First is a touch sensor, which is capable of detecting extremely small forces. The sensor passes the signal along to a flexible electronic neuron, which makes up the second component. Both these components are improved versions of earlier inventions.

The third and final component is an artificial synaptic transistor, which is modeled directly on human synapses. Sensory signals from the first two components stimulate the third component.

The end result is a very basic simulation of the nervous system. The electronic neuron delivers signals to the synaptic transistor. The transistor was designed specifically to recognize and react to sensory inputs based on the force and speed of low-power signals, effectively mimicking a biological synapse.

The testing process looked for both the ability to sense touch as well as the ability to generate reflexes. One test involved hooking the artificial nerve to a cockroach leg and applying pressure to the touch sensor. The pressure was converted into digital signals, causing the leg to twitch accordingly.  The artificial nerve is also able to detect an assortment of touch sensations; this was demonstrated by the sensor’s ability to know the difference in various letters of Braille.

While this is all very exciting, research into this technology has barely begun. There are countless innovations still to be made in this field, including new devices that will make this prosthetic skin feasible. With that in mind, scientists hope to design low power artificial sensor nets to cover robots as a starting point.