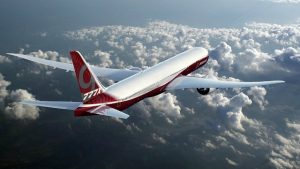 Boeing describes its new 777X as “the largest and most efficient twin-engine jet in the world.” An essential part of the jet’s design is its composite wings, which are more slender and aerodynamic than previous versions. The wings will be built in a new wing facility in Everett, Washington next summer, by 30-foot tall robots that were specifically designed for this purpose. The robots, which are basically gigantic 3D printers worth tens of millions of dollars, will precisely place layers of carbon fiber strips on top of each other to bring Boeing’s unique contoured wing design to the real world. The robots that make the manufacturing technique so special were designed and built by engineering firm Electroimpact.

To make the wings, machine heads that weigh as much as 1.7 tons will deposit carbon fiber strips infused with epoxy resin. Throughout the process, an integrated self-inspection system will warn engineers if anything goes wrong. Electroimpact project manager Todd Rudberg told the Seattle Times that his team’s machines are faster, larger, and more precise than similar composite manufacturing technology. He said:

And we have data to back that up. I have two of the world’s best machines running at the same time in my building. This is awesome.