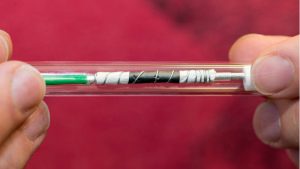 Corresponding author Johannes Wandt with one of the electron paramagnetic resonance probes he developed.

Lithium air batteries could soon replace the bulky lithium ion batteries that power most of today’s consumer electronic devices. They should be much lighter and offer better performance, but there is one big obstacle: lithium air batteries only last a few charging cycles. Although there is no solution yet, researchers at Germany’s Technical University of Munich (TUM) and the Forschungszentrum Jülich believe they have finally pinpointed the source of the problem.

The potential for rechargeable lithium air batteries is well known, since they have a much higher theoretical energy density than traditional batteries. Yet in the real world, they just aren’t practical, because they die so quickly. After only a few charging cycles the carbon electrode becomes corroded and the electrolytic fluid decomposes, leaving the battery with a very short life cycle.

Basic research could provide the foundation for the development of novel, long-lasting lithium air batteries.

The German researchers have now completed a study that confirms a long-held suspicion in the scientific community. The culprit is an extremely reactive material called singlet oxygen. When lithium air batteries are charged, singlet oxygen is released, and in less than a second it corrodes the material that it touches. Now that the problem has been identified, the researchers can focus their efforts on figuring out how to prevent singlet oxygen from forming during charging. The study is described in an article called “Singlet Oxygen Formation during the Charging Process of an Aprotic Lithium-Oxygen Battery,” which published in Angewandte Chemie International Edition.