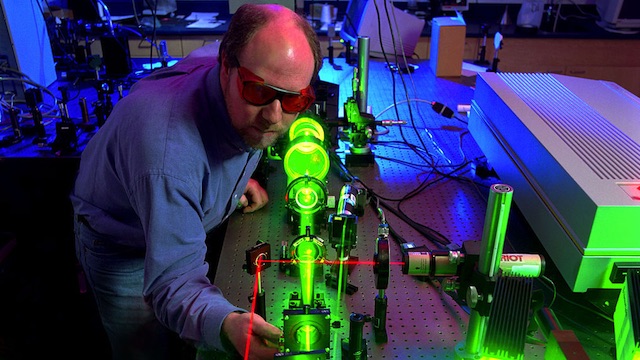 Scientists at the Harvard John A. Paulson School of Engineering and Applied Sciences (SEAS) are working on a way to use infrared frequency combs to generate terahertz frequencies. This research could change the world of communications and impact a wide variety of scientific fields.

Optical frequency combs are commonly used in a variety of applications. They can measure and detect the different frequencies of light (what we know as colors). While most lasers emit a single frequency, these combs actual send out multiple frequencies at a single time. It is believed that this unique trait could prove ideal for generating terahertz frequencies.

Terahertz frequencies lie in the electromagnetic spectrum between infrared light and radio waves. They are highly coveted for their potential in multiple applications, but have proven difficult to source by conventional means. Scientists have discovered that an infrared frequency comb in a quantum cascade laser could provide newer and simpler ways to create terahertz frequencies.

The system creates a spectrum of teeth in the comb with spacing that is ten times larger than conventional combs. Called a harmonic frequency comb, this model allows modes of light to come together in a way that creates pure terahertz tones.

quantum cascade lasers is surprising from a laser physics point of view. Until recently, it was thought that multimode lasers would normally lase on all the possible frequencies of the cavity. In the harmonic state, many cavity frequencies are skipped. Even more remarkable is that this discovery opens up unforeseen opportunities in unused regions of the electromagnetic spectrum, the terahertz.”

The harmonic frequency comb has numerous advantages over its predecessors: it can be operated at room temperature, whereas older models required a very low temperature to function. Additionally the comb uses commercial quantum cascade lasers, and can automatically switch modes when electrical current is added.

Scientists believe that this new discovery could provide new applications for frequency combs, particularly when it comes to wireless communications. By utilizing terahertz frequencies we could someday soon enjoy high-speed and high data rate in our digital communications on a massive scale.