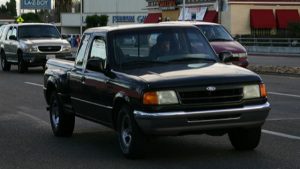 Ford is recalling more than 360,000 Ranger pickup trucks because they are equipped with defective Takata air bags that can be fatal in the event of a crash. The National Highway Traffic Safety Administration (NHTSA) recently announced that another death was caused by Takata’s explosive air bags. In late December, a man was driving a 2006 Ford Ranger in South Carolina when the truck hit a cow, causing the air bags to deploy. According to a NHTSA document, metal from the airbag inflator canister exploded, struck the driver, and killed him. Consequently, NHTSA is expanding Takata’s (already massive) recall to include 5 million additional vehicles made by Audi, BMW, Daimler Vans, Ford, Honda, Mazda, Mercedes Benz, Saab and Volkswagen.

Ford has now announced that certain model year 2004-2006 Ranger trucks will be recalled. Just like the many other Takata-related recalls, if the front air bag is deployed, excessive internal pressure can cause the inflator to rupture, sending out shards of metal that could hit drivers or passengers and result in serious injury or death. Starting in March, Ford will notify owners, and dealers will replace the air bag inflators, free of charge.