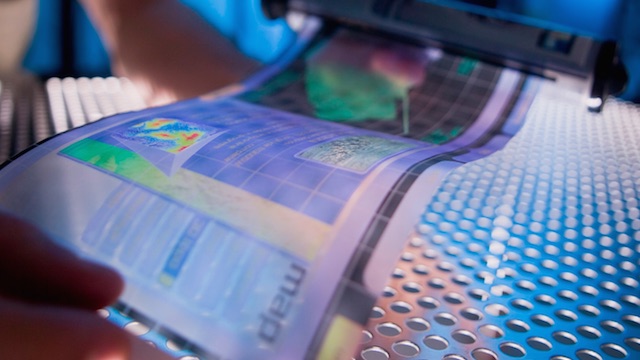 Scientists from the Korea Advanced Institute of Science and Technology (KAIST) have designed and created a new, ultra-flexible organic flash memory. The joint research team, which included scientists and engineers from the School of Electrical Engineering and the Department of Chemical and Biomolecular Engineering, are hailing this creation as a significant step forward in the fields of disposable and foldable technology.

The flash memory is extremely flexible, capable of being bent down to a radius of an astonishing 300 micrometers. It also has a long projected retention rate, and a programming voltage that is equal to current industrial standards. Perhaps most significantly, the flash memory can be applied  to non-conventional substrates including plastics and papers. This means that the impressive capabilities of this technology can be used in a wide range of applications.

In a relatively short time, flash memory has become virtually essential to daily technological existence. It is a non-volatile transistor-based storage system that benefit from being straightforward, uncomplicated, and cost-effective. This goes a long way to explaining it rampant popularity. But while people have relied on flash memory for much of their daily device usage, advances in the field of organic electronics have been slow.

With other devices with flexible material taking the lead (such as thin-film transistors), it seemed for a while like flash memory might be left behind. One of the primary challenges of adjusting the technology has been finding a way to simultaneously boost flexibility and performance. More often than not, succeeding in one resulted in sacrificing the other.

The scientists at KAIST found a solution to this pervasive problem in thin polymeric insulators. These insulators were grown with initiated chemical vapor deposition, which is a vapor-bases growth technique for polymers. They also lowered the voltage of the device from about 100 volt to around 10 volt. Although previous designs required the higher voltage to ensure long memory retention, the new flash memory has a projected data retention time of more than 10 years.

“This study well illustrates that even highly flexible flash memory can be made to have a practically viable level of performance, so that it contributes to full-fledged wearable electronic devices and smart electronic paper.”

Research is ongoing, but these advances indicate that flash memory could soon be a viable tool in flexible and disposable technology in ways we previously believed were impossible.