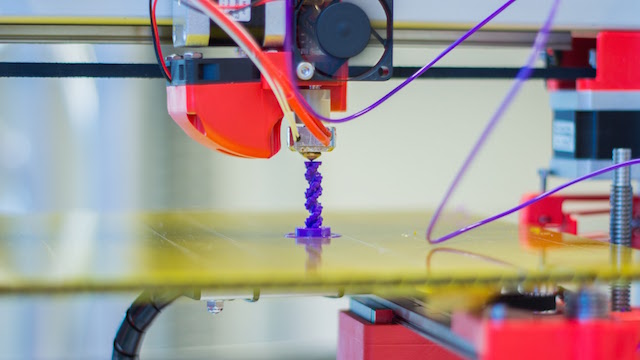 Scientists from Harvard University’s Wyss Institute for Biologically Inspired Engineering and the Air Force Research Laboratory have joined forces to create a new method for the digital design and printing of flexible electronics. This could be the technique that makes flexible, stretchable technology faster, easier, and less expensive to create.

The method is known as Hybrid 3D printing. It relies on additive manufacturing, which allows it to integrate soft and conductive inks with material substrates. This allows the printer to create wearable, flexible electronic devices.

“This is the first time a 3-D printer has been shown, in a single process, to print stretchable sensors with integrated microelectronic components. Starting from nothing, the printer builds an entire stretchable circuit that blends the mechanical durability of printed components with the robust performance of off-the-shelf electronics.”

During a demonstration, the 3D printer constructed conductive traces of flexible, silver-infused thermoplastic polyurethane. Using a pick-and-place method, microntroller chips and LED lets were set into the substrate. This was augmented by an empty printer nozzle, as well as a vacuum system.

Testing showed that the devices were capable of functioning perfectly, even after being stretched over 30% from their original size. Inspired by these results, Harvard scientists created microelectronics and sensors which were placed onto a spandex sleeve. The sleeve responded accordingly to the movements of the person wearing it. Additionally, scientists created special pressure sensors for shoes. These flexible sensors could easily track and monitor the user’s gait.

Now scientists are exploring just how far this technology can go. Some are investigating whether the design would prove useful in the building of antennas and sensors onto a variety of different structures. But before they get too crazy with their ideas, the scientists need to address a significant concern: the power.

In order to appropriately and effectively power these stretchable devices, you need a stretchable battery or other printed power source. This is still a work in progress, although it is one that scientists are very confident they can pull off. The materials may be in the early phases of development, but the future of flexible technology is looking bright indeed.