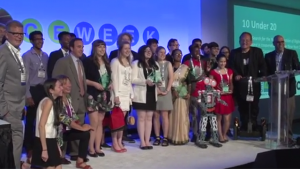 This year’s Consumer Electronics Week (CE Week) in New York City had a special focus on young innovators. For the first time, the event included an awards competition to celebrate the city’s best young tech inventors. At the awards ceremony, technology lifestyle author and event host Robin Raskin described the students as a new generation of kids who are “digital natives from the moment they are born.” Winners of the “10 Under 20: Young Innovators to Watch” awards received backpacks filled with $1,000 in prizes such as gift cards, gadgets, and miniature programmable robots to share with their schools.

The winning projects included student organized hackathons, several apps, and educational toys, such as a subscription service that delivers new science experiments to kids each month. Many of the winners were budding electrical engineers: