“We are very excited that the DASDEC’s multilingual tools proved to be helpful in supporting FEMA’s regional alert test,” said Edward Czarnecki, Monroe Electronics’ senior director for strategy and global government affairs. “The successful completion of this test gives us and our broadcast partners confidence that we have a flexible and workable path forward to support multilingual public alert and warning in this country.”

During the live test, FEMA initiated a National Periodic Test (NPT) through DASEOC emergency communications platform as a Common Alerting Protocol message in English and Spanish. The bilingual EAS test message was sent at 1:20 p.m. PST at the FEMA demonstration booth at the International Association of Emergency Managers conference held in Las Vegas . This bilingual EAS message — targeted to six states — was disseminated via FEMA’s IPAWS system . The test was initiated by Joseph Nimmich, deputy administrator of FEMA. 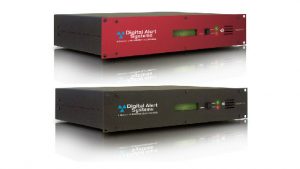 Participating stations from Entravision, the largest affiliate group of both the top-ranked Univision television network and Univision’s UniMas network, automatically aired the Spanish version of the FEMA NPT, followed by the English version. Other participating stations, such as Minnesota’s TPT, coupled their OmniLingual software with DASDEC MultiStation™ software to enable different language selections for each program stream.

“For more than a decade, ECHO and Twin Cities PBS have been working on meeting the needs of our increasingly diverse audiences to support public health, safety, and emergency messaging. With community input and our partnerships, we can support the needs of warning and alert systems,” said Lillian McDonald, Managing Director of ECHO at TPT. The success of today’s test is exciting, as it indicates that we do indeed have the capacity to convey multilingual public alerts and warnings to the diverse communities we serve.”

The DASDEC is currently utilized by the large majority of broadcast television stations across the nation, as well as radio stations, universities, and a variety of government facilities. The DASEOC emergency communications platform is used by numerous states and counties to provide interoperable alert messaging capability into IPAWS and the Emergency Alert System. More information about Monroe Electronics products is available at www.monroe-electronics.com.