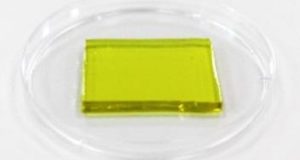 Engineers from the American Chemical Society may have found a new way to cool electronic devices while recovering waste heat. This would allow electronic devices to work for longer periods of time without running the risk of overheating, which can slow down devices or even damage them. To achieve this, researchers created a new type of hydrogel that can turn waste heat into electricity while simultaneously keeping your device cool.

The team of scientists was determined to create a device that was capable of both keeping electronic devices from overheating while at the same time taking the waste heat and converting it into electricity. While there are devices out there that can successfully perform either of these actions, engineers have yet to make one that can do both at the same time — at least, until now.

In order to create a smart thermogalvanic hydrogel that was capable of performing both these functions simultaneously, the team first constructed a hydrogel. This gel was composed of polyacrylamide framework which had been infused with certain ions as well as water. The hydrogel was then heated, causing the ferricyanide ions and ferrocyanide ions to transfer electrons between electrodes. This resulted in electricity being generated; at the same time, the water in the hydrogel evaporated, causing it to cool down. Once the hydrogel’s task was completed, it was able to actually regenerate itself simply by absorbing water from the surrounding air.

Engineers demonstrated the new material by attaching it to a cell phone battery. The cell phone battery was fast discharging, allowing the hydrogel to convert some of the waste heat into 5 μW of electricity; at the same time, the temperature of the battery dropped by 68 degrees Fahrenheit. This allowed for the battery to function safely, while simultaneously harvesting enough electricity to either control the cooling system or the battery monitor.

Although this new technology needs further work and streamlining before scalability is considered, experts believe it could have numerous applications in helping keep devices like cell phone batteries, LED lights, and computer microprocessors cooled down and running smoothly. Researchers intend to continue their investigation into this new type of hydrogel, as well as exploring what other applications could benefit from its use.