Fighting Back Against Overheating Devices 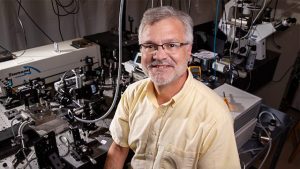 In an exciting collaboration, scientists from the University of Texas, Dallas, and the University of Illinois at Urbana Champaign have devised a new way to keep high-powered electronic devices from overheating. Researchers believe this new innovation could help prevent programs from crashing, systems from slowing down, and a number of other serious issues.

Using boron arsenide’s crystal-growing properties was a key component in this work. The material has superior thermal properties, allowing it to dissipate the heat that can accumulate inside an electronic device. This study is the first time that a previously predicted class of ultrahigh thermal conductivity materials has been realized. Since boron arsenide does not naturally occur in nature, scientists have no choice but to create it in a lab. The material requires a very specific structure, as well as a low defect density, in order to achieve peak thermal conductivity. As a result, the growth must be controlled at every step by researchers.

“We studied the structural defects and measured the thermal conductivity of the boron arsenide crystals produced at UT Dallas. Our experiments also show that the original theory is incomplete and will need to be refined to fully understand the high thermal conductivity.”

David Cahill, professor and head of the department of materials science and engineering at Illinois

Typically, high-powered electronic devices and high-performance computer chips are made of silicon. Silicon is a crystalline semiconducting material with decent heat-dissipating properties. Unfortunately, our rapidly advancing technology has long been testing the limits of silicon’s abilities.

For a while, diamond seemed like a viable alternative to silicon. Diamond has about 15 times the thermal conductivity of silicon; unfortunately, diamond-powered computers would be prohibitively expensive, making commercialization virtually impossible. Now, scientists think they have an alternative.

Using a technique known as chemical vapor transport, scientists synthesized the boron arsenide crystals. While still in the vapor phase, arsenic and elemental boron are combined. From there they are cooled, condensing into small crystals. Once the ideal conditions for creating high-quality crystals were determined, scientists then had to inspect the lab-grown crystals to ensure they did not have any defects that could negatively impact their thermal conductivity. Scientists used a technique called time-domain thermoreflectance as well as electron microscopy to ensure the crystals used were ideal for their needs.

The study determined that their lab-made material had thermal conductivity up to three times higher than any other materials available. The team of scientists will now try other processes to determine if it is possible to improve the growth and properties of the material so it can be used in large-scale applications.