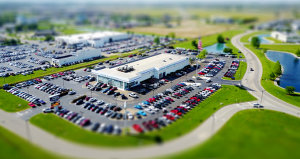 The U.S. Federal Communications Commission (FCC) has issued a warning to a North Dakota automobile dealer regarding electromagnetic interference generated by the dealership’s lighting systems.

Under the terms of a Citation and Order issued by the Commission in early January, the automobile dealership, Lithia Toyota of Grand Forks, ND, must “stop operating devices that are causing interference to licensed radio operations…including lighting that utilizes radio frequencies in their operation.” The dealership’s failure to take action to resolve the interference could result in penalties and fines of up to $16,000 per day, notes the Citation.

The interference reportedly dates back to April 2016, when Verizon Wireless filed a complaint with the FCC about radio emissions emanating from the dealership’s outdoor portal lighting. A subsequent investigation by the FCC’s Enforcement Bureau confirmed the source of the interference, and the dealership orally agreed to resolve the problem. However, the interference problem remained unresolved, leading to the FCC’s action.