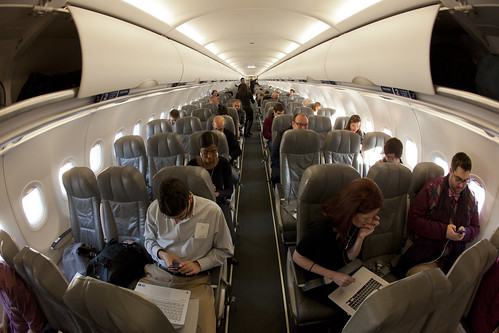 Have you ever been on a long flight, happily streaming your favorite shows on Netflix? We didn’t think so. Despite a lot of hype when in-flight Wi-Fi launched in 2008, connection speeds have been slow, thanks to several technological and financial challenges. However, broadband companies such as Gogo are working on new designs that should help bring connection speeds up to rates that can support modern electronic devices.

An initial phase of improvement is already underway. Gogo is upgrading to a more efficient radio system that involves installing two separate systems on a plane’s belly. When the signal can lock on two transmitters, the streams bond into a 10-Mbps signal. In the future, Gogo plans to add satellite service, either on its own or along with ground-based communications. They have already received FCC approval for the necessary geostationary satellites.

Additionally, new aircraft systems are tackling design flaws that troubled Boeing’s in-flight Internet service, Connexion. Instead of using a bulky gimbal to keep a satellite pointing the right direction, new solutions include an antenna with beamforming technology that shapes the antenna’s output into a more precise signal. Additionally, Boeing has announced plans to partner with Panasonic Avionics to adapt a military phased-array antenna design for commercial use in 2016. Unlike Boeing’s fully electronic design, Gogo is exploring a mechanical system that would adjust antenna beamforming in two separate phase-array systems.

Lastly, another possible boost could come from the FCC, which is currently accepting comments in their auction for 500 MHz in the 14 GHz band for air-to-ground broadband.