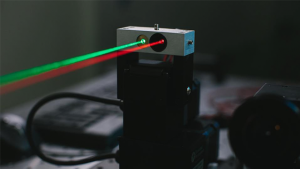 Facebook founder and CEO Mark Zuckerberg has said (on Facebook, where else?) that his company is developing several new technologies to “create internet services at planetary scale.” Lately, it seems like everyone has new ideas for bringing internet connections to more people. Google wants to stream data via drones and balloons, Virgin Galactic plans to use a gigantic satellite constellation, and Microsoft is using the white spaces between television channels. Now, on July 1, Zuckerberg posted photos of a new system that is being developed to use lasers to beam internet connections down from drones in the sky. Zuckerberg said that the lasers would “dramatically increase the speed of sending data over long distances.” Drones, satellites, and lasers are all part of Facebook’s ambitious project called Internet.org, which aims to bring affordable internet access to the world.

The photos come from Facebook’s Connectivity Lab, where researchers are working on free space optics, a method for transmitting data between platforms through the air. Free space optics would operate similarly to fiber optic communication by using light to wirelessly send data streams. However, as the “free space” name implies, the light would not be contained in cables. The images Zuckerberg shared use red and green beams of light for demonstration purposes, but the actual lasers would use light that is outside the visible spectrum.