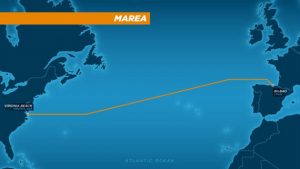 In the past, telecommunications companies have built the infrastructure to support the Internet, but now edge providers (the businesses that provide online content and services) are taking a direct approach. Microsoft and Facebook just announced that they are partnering to build a giant cable that will be capable of moving 160 terabits per second. This will make it the highest capacity subsea cable, more than doubling Google’s new cable, which is unfortunately named “Faster.” It will support growing demands for online services and cloud computing.

The new cable will go from Virginia Beach to Bilbao Spain, a 4,100 mile stretch with a route that is a bit different from other transatlantic cables. Most cables start in the New York and New Jersey area, but this southern location will help add geography diversity to undersea cables, which should give internet users peace of mind in case of a physical disaster that could knock out the cables in popular locations. Named MAREA (Spanish for tide), the cable owes its high capacity to eight fiber pairs, while most cables only have two, and Google’s has six. Construction is set to begin in August 2016 with a projected completion date of October 2017. The cable will be built and operated by Telxius, the infrastructure branch of Spanish telecom company Telefónica. It will have an open design that is compatible with a variety of networking equipment.

We’re always evaluating new technologies and systems in order to provide the best connectivity possible. By creating a vendor-agnostic design with Microsoft and Telxius, we can choose the hardware and software that best serves the system and ultimately increase the pace of innovation. We want to do more of these projects in this manner — allowing us to move fast with more collaboration. We think this is how most subsea cable systems will be built in the future.