Exploring the Capabilities of the Fast Fourier Transform 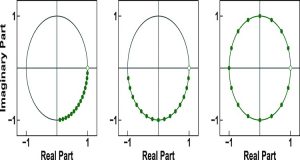 Iowa State University computer engineers have created an algorithm that could help to improve digital communications. This algorithm, when combined with a closed-form solution, takes one of the most commonly used algorithms and unlocks its hidden potential.

The algorithm is actually part of two, which are known as the fast Fourier transform (FFT) and the inverse fast Fourier transform (IFFT). These algorithms have been commonly used since way back in 1965; in the modern world, they are responsible for analyzing the signal from a cell tower or base station and synthesizing the signal from your phone to the base station, respectively.

There is already a generalized version of the FFT that is more useful and has been since 1969. This was known as the chirp z-transform (CZT). However, until now, scientists were simply unable to come up with a generalized version of the IFFT. But researchers from Iowa State changed that by devising a closed-form solution for the inverse chirp z-transform (ICZT) as well as an algorithm for quick computing.

Now a new paper published by the research team is showing some of the new results regarding their algorithm. According to the paper, the algorithm functions ‘on the unit circle,’ and how it can interact with frequency components. These frequency components are generated in the complex plan by sample points from the unit circle. The points come together to form a contour called the ‘chirp contour.’

The ICZT algorithm is an improvement on the IFFT because it is capable of working with contours from only a small segment of the unit circle. The IFFT, on the other hand, is only able to work if the sampling points are equispaced and fully cover the unit circle. This dynamic difference allows for non-orthogonal frequency components to be utilized, lifting one of the biggest restrictions binding IFFT.

Scientists intend to continue investigating the full extent of their algorithm. They believe that the ICZT could result in improved utilization of the spectrum. Engineers also believe that their work could lead to advances in other applications, such as medical imaging, electronics, wireless communications, and signal processing.