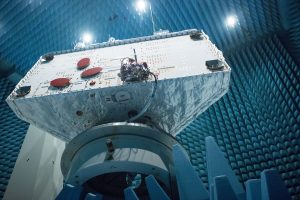 The European Space Agency’s BepiColombo orbiter recent underwent electromagnetic compatibility, radiated emission and susceptibility testing to prepare it for a mission to Mercury. The orbiter was tested inside the Maxwell EMC test chamber at the ESTEC Test Centre in the Netherlands.

The orbiter will be launched to Mercury, an ESA mission being conducted in cooperation with Japan, with the goal of gaining a better understanding of the planet and how our Solar System was formed. The mission is especially challenging since Mercury is the closest planet to the Sun, the spacecraft will need to be extremely resilient in order to withstand the harsh environment. Therefore, both the ESA’s and Japan’s orbiters need to go through rigorous testing. The BepiColombo orbiter was even deliberately positioned off-kilter during the tests to simulate all possible scenarios. The orbiter was positioned to allow a medium-gain antenna to deploy, while the high-gain antenna reflector also deployed in a worst-case position. All test cables used were shielded to reduce potential interference.

“We are performing two types of compatibility testing,” explained Marco Gaido, assembly, integration and test manager for BepiColombo. “First, we are checking the craft is electrically compatible with the electrical field generated by the Ariane 5 launcher that will deliver it into orbit, with no possibility of interference with BepiColombo’s receivers. Secondly, we are testing if there is any risk of incompatibility between the different subsystems of the spacecraft itself when it orbits Mercury. In particular, we want to check that its trio of antennas on top can communicate properly with Earth.”

Next, Japan’s Mercury orbiter and a carrier spacecraft will be tested at the same facility. The mission is planned for early next year.