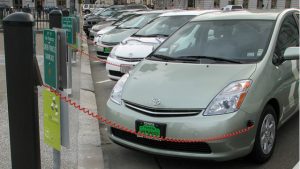 In the future, electric vehicles could get quick power boosts at charging stations to supplement the slow and steady charging that takes a few hours at home. Researchers at Swiss University EPFL have proposed an intermediate storage system that would allow ultrafast charging of hundreds of electric cars without overloading the power grid.

While most drivers are used to spending just a few minutes filling a gas tank that will last them a few hundred miles, electric vehicles have to stay plugged in for several hours to achieve a similar range. Ultrafast charging, on the other hand, could push more power into the vehicle’s battery in a short amount of time, but it the EPFL researchers say the power grid won’t be able to handle this kind of surge in power usage.

“We came up with a system of intermediate storage,” said Alfred Rufer, a researcher in EPFL’s Industrial Electronics Lab. “With this buffer storage, charging stations can be disconnected from the grid while still providing a high charge level for cars.” This new system would use a giant lithium iron battery (the size of a shipping container), which would constantly be charging at a low level of power from the grid. Cars could hook up to the battery to quickly get a power boost without affecting the grid.

Rufer and his colleagues testing their idea by building a trailer with an intermediate storage battery that draws power from the low-voltage grid. According to the researchers, this system was able to provide 20 to 30 kWh, which is enough to charge a standard electric car battery.