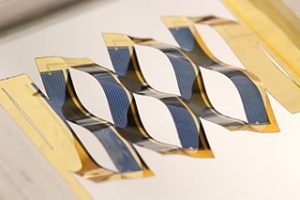 In many ways, engineers combine science with art to design something useful. Taking this concept quite literally, engineers at the University of Michigan recently teamed up with an artist to solve a challenge with solar panels. Although solar cells capture up to 40 percent more energy when they track the sun across the sky, conventional trackers are heavy, bulky, and prone to wind damage. To find a better option, engineering doctoral students Aaron Lamoureux and Kyusang Lee incorporated kirigami, the ancient Japanese art of paper cutting, into their design.

Together, the team developed a lightweight solution that maximizes the surface area of a cell for soaking up sunlight—an improvement which could ultimately reduce the cost of solar electricity. The magic happens inside a solar panel, where an array of solar cells split into tiny segments that follow the position of the sun. “The design takes what a large tracking solar panel does and condenses it into something that is essentially flat,” explained Lamoureux.

To create the solar arrays, the engineers worked with paper artist Matthew Shlian, who taught them the art of kirigami, a variation of origami that involves folding and cutting paper to make art, such as paper snowflakes. Naturally, harvesting energy from the sun requires different materials than paper and scissors. Lee, an electrical engineer, built custom solar cells and then the team used a carbon-dioxide laser to cut patterns in a space-grade plastic called Kapton. They tried many different designs, but in the end the engineers found that the simplest pattern was the most effective. The final design stretches and tilts to capture the most sunlight. Early tests show that the kirigami solar prototype performs 36 percent better than a stationary panel.

The work is described in a paper published in Nature Communications. Looking ahead, the team plans to scale their design to a larger size, but they will need to move their work off campus because the chambers they used to make the prototypes are too small. The University of Michigan has applied for a patent and is now seeking partners to bring the technology to market.