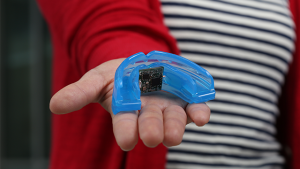 Engineers at the University of California, San Diego, have developed a sensor that can be embedded in a mouth guard to monitor health markers in saliva and transmit the information wirelessly. The technology allows minimally-invasive continuous health monitoring. It could be used to measure performance or stress levels in athletes and soldiers. It could also be used in medical settings, to replace current procedures that require drawing blood. The sensor can measure several biomarkers, but the research focused on uric acid levels, which can indicate medical conditions such as gout and diabetes.

The researchers describe their work the journal Biosensors and Bioelectronics : “Unlike RFID-based biosensing systems, which require large proximal power sources, the developed platform enables real-time wireless transmission of the sensed information to standard smartphones, laptops, and other consumer electronics for on-demand processing, diagnostics, or storage.”

The sensor was designed by a team of nanoengineers and electrical engineers from UC San Diego’s Center for Wearable Sensors. Nanoengineers created a screen-printed sensor using silver, Prussian blue ink and uricase, an enzyme that reacts with uric acid. If uric acid is present in saliva, the Prussian blue ink will detect a tell-tale chemical reaction and the information will be transmitted to an electronic board as electrical signals via metallic strips that are part of the sensor. The electrical engineering size of the team developed an electronic board that is just slightly larger than a penny. It uses small chips to sense and digitize the output of the sensors and then wirelessly transmit the data to a smart phone, tablet or laptop.

The project is at the proof-of-concept stage, and the engineering team will spend the next year embedding all the electronics inside the mouth guard and testing the device’s materials to make sure that they are completely biocompatible. “All the components are there,” said electrical engineering lead Patrick Mercier. “It’s just a matter of refining the device and working on its stability.”