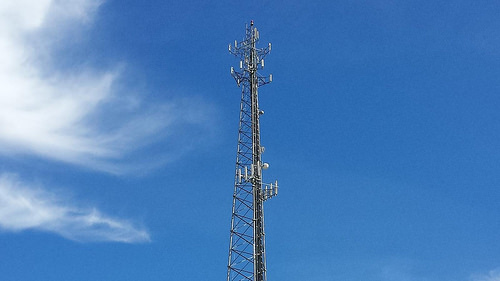 The concept of invisibility has existed since long before Harry Potter made invisibility cloaks popular. In the last decade, scientists have engineered metamaterials that can manipulate light to make objects seemingly invisible, although this has only been done in limited laboratory settings. A group of engineers at Penn State have now achieved a practical application by creating a metasurface that acts like an invisibility cloak for antennas. Their work addresses common interference troubles that arise when several antennas are too close to each other, such as on cell phone towers.

The engineers fabricated a quasi-2D functional metasurface to create a lightweight, low-cost material that hides antennas from each other. In a paper published in Advanced Functional Materials, the authors write that the metasurfaces are made of “arrays of subwavelength electric and magnetic resonators with tailored dispersive properties.” The cloak simultaneously eliminates mutual coupling and blocking, which leads to optimal antenna performance.

“To the best of our knowledge, no one knows how to make something invisible by cloaking over a wide frequency band,” said Doug Werner, who directs Penn State’s Computational Electromagnetics and Antennas Research Lab. “But what we could do, with the current state-of-the-art in cloaks for a narrow band of frequencies, is develop special material coatings to put around narrowband antennas that act as cloaks in order to make one antenna invisible to one or more other closely spaced antennas operating at different frequencies. Importantly, the added artificial coating should not affect the functionality of the antenna inside.”