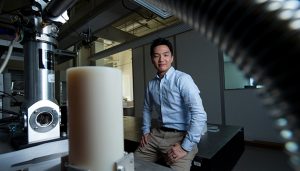 In a recent study titled, Thermal Transport in Silicon Nanowires at High Temperature up to 700k published in the Nano Letters journal, Lee and his team aim to decouple electrical conductivity and temperature to produce energy from waste heat. To demonstrate the valuable role materials serve in the process of heat-to-energy conversions, the team built an apparatus capable of melting wire coatings and destroying the adhesives found in the nanowire chips in order to determine the thermal conductivity.

Jaeho and his team built a measurement apparatus using commercially available equipment and tools, including a vacuum chamber, and customized it with heat-tolerant wiring and screws to withstand the intense heat. A unique sample mounting platform was also created to minimize heat loss and allow for the precise control of the temperature of the nanowires. With this new technique, the research team was able to measure the nanoscale materials in temperatures of up to 800°F, finding that the thermal conductivity of silicon nanowires may demonstrate potential for efficient thermoelectric generation.

Auto manufacturers and tech startups are trying to utilize and commercialize heat-to-electricity applications, but first they need highly efficient building blocks to make that happen. Our work verifies what engineers have long expected: that certain materials would have good thermoelectric properties at the nanometer scale even at high temperatures.

The study provides a deeper understanding of thermal transport in nanomaterials beyond room temperature and offers further insights of surface boundaries and varying mode contributions. Allowing the samples to be heated to such high temperatures can determine which substances have the most suitable thermoelectric properties for intense heat environments as found within automotive, energy storage, biomedical, and other applications.