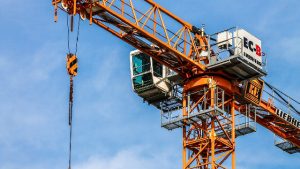 Safety precautions are especially important in construction and manufacturing industries where employees work with heavy and powerful machinery. In the past, physical guards such as metal fencing prevented operators and engineers from getting too close to hazardous locations and procedures. Then more technical solutions were developed, such as safety light curtains or laser scanners that detect when an operator is too close to a hazard.

Radio interference has been addressed by using the 2.4GHz frequency, which is known for stronger signal reliability than the traditional lower frequencies. New wireless technology, such as Bluetooth Low Energy, has also improved wireless systems and minimized interference. As concerns about data and network security grew over the years, so did the ability to protect against possible attacks with methods such as code sequencing and encrypted communication. Battery technology has improved enough so that batteries for the remotes can last on a single charge for the full working day. Lastly, it is still true that wireless control devices for machinery can easily be lost or broken, just like your T.V. remote. However, if a remote is damaged, the base station located on the machine can easily be paired with a replacement remote by a simple radio download. Now that these problems have been addressed, we expect to see more manufacturers using electronic systems to solve safety challenges in the future.